Harmonic analysis of arpeggios in Dance of the Sugar Plum Fairy

I've always liked the arpeggio section in dance of the sugar plum fairy, it sounds so sweet and mysterious. I was trying to figure out the idea behind them. Here's the section in Synthesia. 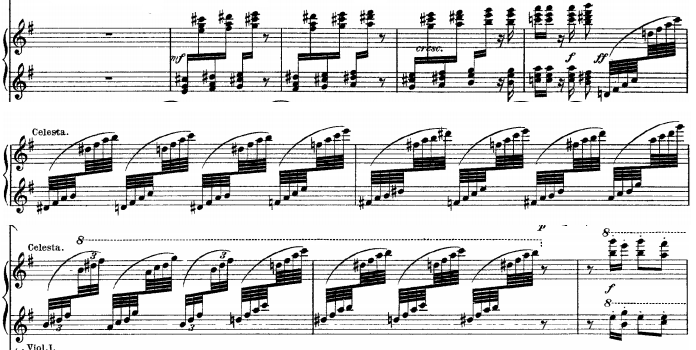 I typed in the notes as followed:

And simplying further (removing repeated chords in asterisk) and using a reverse chord finder I found that the four main chords are:

So I think I know where (1) and (2) chords come from (please correct me if wrong). But I'm having trouble figuring out where (3) (4) came from. They are not in the key or the parallel key.

Another way to look at this is maybe this is a certain scale that he's arpeggiating and not chords. If I take the unique notes of the above section they are: D# F# A B C D E F. But this doesn't form a scale.

So maybe someone knows if its chords and what those 4 are, or if it's not chords maybe it's something else. (?)

There are two necessary aspects to acknowledge that help us understand this section. First is that these chords alternate between something and B7 (or the B-major triad). This is important because, since the excerpt is in E minor, the chords in question alternate between something and V7. This is a big clue that we can understand these chromatic harmonies as relating to V(7).

The second aspect is of something that we call common-tone chords. A common-tone chord, simply put, is some chromatic harmony that shares at least one pitch with the chord it is decorating. Since Nutcracker was written by Tchaikovsky, let's look at a Tchaikovsky example, this one from the first movement of his sixth symphony:

We're in D major. The second chord in the first full measure is a little odd...an E♯ diminished seventh chord? If we had to give a Roman numeral, it would be...a ♯ii°42?! Even if we understood this as an applied chord, it would function as a vii°7 of F♯, but there's just one problem: it doesn't resolve to an F♯ chord, but rather back to the same D chord that preceded it!

Note that we could say these are just upper-voice non-chord tones. This isn't untrue! But this is such a common tool—it's all over the place, for instance, in barbershop music—that it's received a name, so I'm using that name here.

Now, back to your question. Let's look at the harmonies again:

And notice how every single harmony has at least one common tone with the prevailing V(7) chord. We can make this more obvious with some notation:

In the above example, the "x" noteheads show a common tone with the preceding and/or succeeding chord. You'll also notice that most other voices move by half step (with only one exception: the A to B between the fifth and sixth measures).

So, welcome to the world of common-tone chords. Whereas my example above was a CT°7, the examples in Nutcracker include common-tone dominants, major-major sevenths, and half-diminished sevenths. But in all cases, these common-tone chords function to elaborate the prevailing harmony; in this case, a clear V7 that will smoothly lead back to the tonic E.

Lastly, it's also possible that this is a modified version of the omnibus progression. In an omnibus progression, two pitches of the V7 stay constant while the remaining two pitches move by half step in contrary motion. Although these rules aren't strictly followed in this Nutcracker example, it's important to note that the two pitches that stay constant in the omnibus are scale-degrees 2 and 4. In E, these scale degrees are F♯ and A—the two pitches that are often (but not always) in common in this Nutcracker example.

1
Are seventh and extended chords used to create dream-like and fantasy music?

2
Harmonic Analysis for 4 Voices vs Many More Voices
3
Harmonic analysis of progression: Fm, E♭, D, Gm
4
What's the correct analysis of this harmonic sequence at the end of the first movement of Dvorak's Fourth Symphony?
5
Using standard Roman numeral analysis how should 7th and 9th qualities be determined?
4
Compelling Use of Non-diatonic Chords in Rolling Stones
0
I want to create chords from solely interval structure as opposed to building upon triads?
4
Diminished seventh spelling but functioning as an Augmented Sixth?
3
Why do a 1, 3, and sharp 4 work well in this piece?
1
Why do parallel keys matter?