Perfect fourth is dissonant when there's no note below it?

(edit: I should explain that the original question, before correction, asked about a FIRST inversion triad.)

Piston is talking about stability, not the sort of dissonance we get from minor 2nd intervals. A second inversion triad has the feeling of being a double suspension - hence the classic '6/4' cadence sequence. 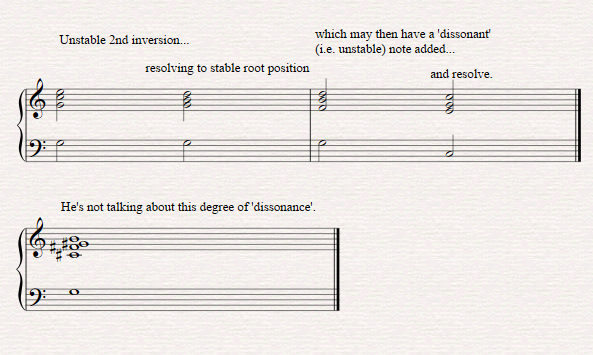 Not the answer you're looking for? Browse other questions tagged theory harmony intervals or ask your own question.

3
Why are there major and minor intervals?
14
“The intervals considered dissonant have changed since the 'Middle Ages'”; How so?
5
Consonance/Dissonance of 5th according to the explanation of 4th
2
Does melody note function change with each chord change in a certain harmonic field?
1
Classification of 9th, 11th, and 13th intervals by consonance and dissonance
2
Dissonances with bass versus in upper voices. 4-part harmony
10
Why are second inversion triads considered less consonant than first inversion triads?