As an organist-amateur I recently bought "An Easy Bach Organ Album". In BWV 691 there's a symbol which looks like a half of a circle, or a small letter c. Moreover, the symbol is connected with the next note. How is the symbol called and what does it mean? 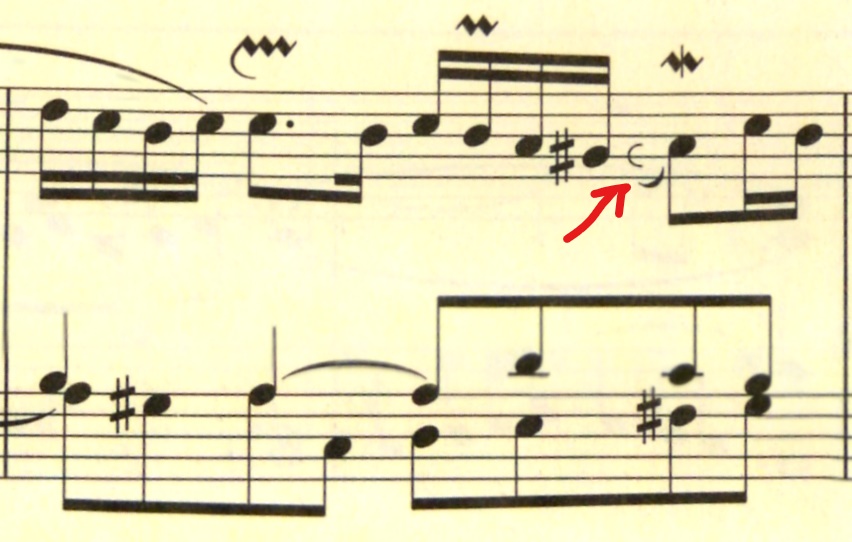 The "c" is a "slide", which would be played as F# G# A (starting on the beat). That would then be followed by the mordent, so the whole ornament would be F# G# A G# A played (approximately) as four 32nd-notes followed by a 16th.

But that sounds pretty crude musically, because the collision of the F# on the beat in the bass and treble.

The "slur" is probably intended to prolong the note before the ornament, which removes the weakness and would be played something like this. Of course ornaments are not meant to be played in strict time, and this implies a tempo slow enough to let all the notes "speak" properly, and let the listener hear the F# bass on the beat against the G# in the treble before the ornament starts.

A modern edition (Les Éditions Outremontaises) has this simpler version 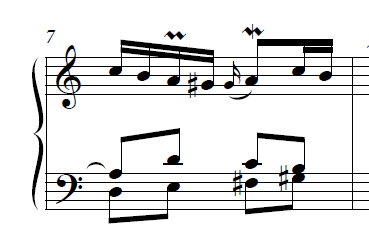 The Bach-Gesellschaft Ausgabe edition has the "slur" but not the "slide", and does not have the G# grace note in Les Éditions Outremontaises.

There is a more longer and more elaborate version of the chorale prelude, BWV 691a, which has no ornament at all in the Bach-Gesellschaft Ausgabe edition.

So (as with all baroque ornaments) at the end of the day you play whatever version you prefer - and not necessarily the same version every time you play the piece.

Not the answer you're looking for? Browse other questions tagged notation organ or ask your own question.

7
What is this cross staff tied/slurred note supposed to be?
14
What does the "+" symbol mean in a keyboard piece when attached to a note?
1
Chord symbol confusion
7
8 under clef and timing questions
4
In percussion notation, how does one interpret a slurred tremolo?
6
Strange Ornamental Symbol on Bach Piece
5
What is this circle?
7
arpeggiated chord and half bracket symbol - what does it mean? (piano)
5
What symbol is used to go from common time to half time?