From Tchaikovsky's harmony textbook, "Guide to the Practical Study of Harmony", page 98:

In the image below, why are the bars contained in the red box of example 258 considered good? The paragraph (Section 88) before example 257 in the image seems to imply that these would be "not good" examples, as the blue highlighted notes in the red box show thirds and fifths violating the above paragraph. 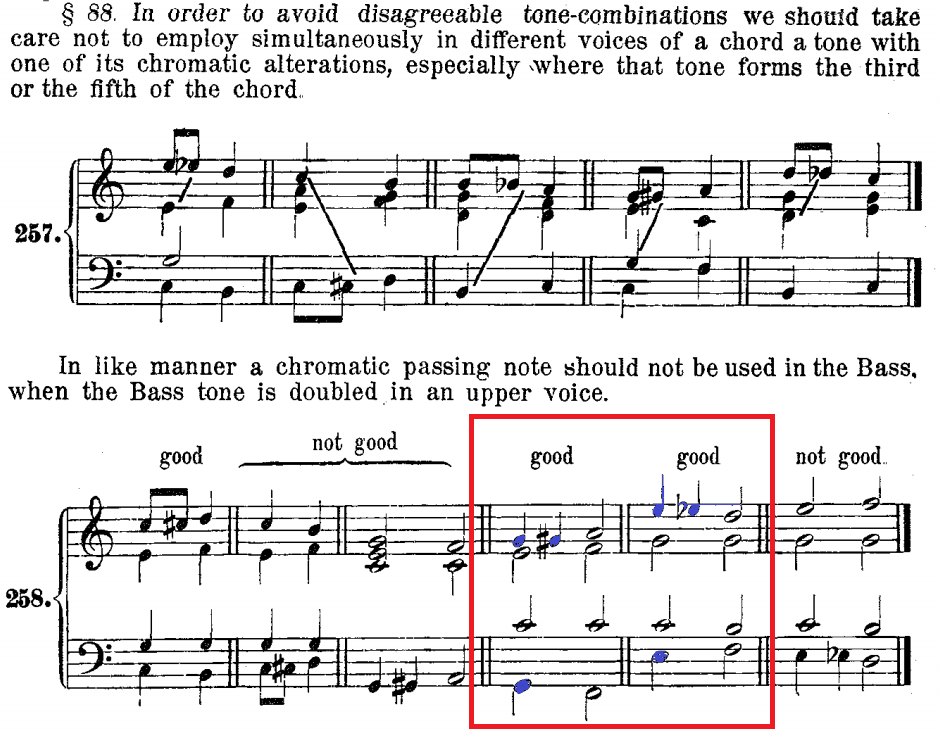 (I deleted my initial answer. Sorry, I missed your whole point!)

IMO lot of old theory books have this kind of unclear language.

One way to make sense of it is the general wording "we should take care not to..." is illustrated with #257 - just to show what we are to be concerned with - then the more specific point is made about bass and upper voices and #258 illustrates good and bad.

Bars 4 and 5 of #258 seem to contradict the "take care not to employ" direction of section 88. The only sense I can make of it is it doesn't say "never use..." It's not an outright prohibition. If I try to make sense of it, I imagine it means something like "take care when combining a pitch in one voice with its chromatic alteration in another voice, don't do it indiscriminately, avoid altering the third or fifth, avoid placing the alteration in the bass." That's my sense of the words in combination with the musical illustrations.

If the wording was...

In order to avoid disagreeable tone-combinations we should take care when employing simultaneously in different voices of a chord a tone with one of its chromatic alterations, especially where that tone forms the third or the fifth of the chord. Specifically a chromatic passing note should not be used in the Bass when the Bass tone is doubled in an upper voice.

...and if #258 bars 4 and 5 were labelled acceptable, I think it would all make sense. #257 merely shows the cross relationship of concern and #258 are specific example of good, acceptable, and bad. (Italics for the wording I changed, which isn't much.)

Keep in mind it's a 1900 translation from German into English. We probably should consider some finer points of wording were not perfectly captured.

In example 257 (which I answer second as it's taking more thought for me to figure out what's going on), the chromatic tones are in the third or the fifth of the implied harmony. I suppose that having the third as a chromatic passing tone may blur the major or minor quality of that harmony (of course, one may wish to do that.) I'm not so sure about the fifth. Maybe having G-G#-A in the soprano with a C-X-F in the bass would work by making the C a sort of secondary dominant though being an augmented chord, or maybe not.

There are two (at least) cases where chromatic passing tones don't cause problems. One is between sections; the other is between the ascending and descending forms of a minor scale. In the minor case, the two forms are not really chromatic but mutable.

Not the answer you're looking for? Browse other questions tagged harmony voice-leading chord-voicings or ask your own question.

1
Using passing notes in SATB writing
5
Hidden fifths between tenor and soprano in Tchaikovsky's "Guide to harmony"
1
Constraints for doubling upper voices in 4-part harmony
3
Why harmonize non-diatonic notes with major 3rds above, in a "minor key" context?
4
Stepwise bass movement/intermediate (passing) harmony technique
6
How to compose better chromatic harmony
1
Why is this jump allowed in four-division time strict part-writing?
1
Harmonizing a modulating melody with ornamentations
3
Why is the progression V - IV not in my harmony and voice leading book?