Is there a constant relation between a song notes and its chords progression?

Please forgive me in advance if I am using the wrong terms to describe something, I am not a professional musician.

Sometimes I can play a song notes on the guitar (same notes the singer sings) and it fits perfectly to the chord progression as it goes on and I play part of chords and add the singer's notes to make a richer sound.

I am constantly moving to play the next chord or part of it and adding some notes as the singer sings (in that chord pentatonic scale) and it sounds perfect. for example, I got this to work for me for example in a Bob Marley's song "Soul Rebel"

and it works perfectly. part of the time I am strumming part or full chords and in the other part I am "filling in" the notes the singer sings. but it always works only for the specific chord in the chord progression.

What I am trying to understand is why doesn't it work on all songs? it seems to me that sometimes the chord progression is far off from the song notes although it still complements it, since they are all in the same key right?

for example, I can't play the chords or parts of them and the notes (in those chords) the singer sings to make up the song of Bob Marley's: "Redemption song"

the notes might fit at the first chord as it starts with the words: "Old pirates" on a G chord and I can be on the G pentatonic scale. but then it changes to Em which the notes of the song do not fit the Em scale at that time (or they do but they sound bad?), the best sound I get is keep playing the notes on the G scale. and playing the chord progression (on another guitar for example) regardless. This is totally different with what I'm doing in the first song I mentioned I really play it well, and I play the notes of what the singer sings while strumming part of the current chord in the progression and adding more notes as the singer sings (fits the pentatonic scale of each chord while the progression goes).

what is it that I am missing and if there is a specific lesson I should take I would greatly appreciate if you'll tell me what it is.

Edit: "Rockin Cowboy" really got what I was asking and offered ways to try to solve the problem (as trying chord alternatives and a capo)

I am also thinking about uploading some videos demonstrating the ease for the first song and the "impossibility" in the second one. but that will take me time to get it done, uploaded and shared.

Can't thank you all enough!

Second Edit: OK! Please excuse my ignorance but it seems I found the right name for what I am looking for! apparently it's called just plain "Fingerstyle". PLEASE take a look at this YouTube clip, it represents exactly what I am doing (and what is not always working for me- sometimes it works for me flawlessly and in other songs I can't move past the first chord!)

apparently the guy who plays is a master in doing covers in fingerstyle guitar.. his has tons of videos as these in his channel.

I am talking about this kind of playing and even a little more full chords sounds. please tell me what is the theory behind what is going on in this case, and what are the scenarios one could face trying to play different types of songs and if there are known ways to approach them.

let me just also mention that I am playing a classical guitar and I am used to finger-style playing far more then using a pick. I can also add that I've been playing for many years and I don't have any technical difficulty in playing in this style but I don't know the theory behind it.

I found some information at Wikipedia about fingerstyle, I quote:

Music arranged for fingerstyle playing can include chords, arpeggios and other elements such as artificial harmonics, hammering on and pulling off with the fretting hand, using the body of the guitar percussively, and many other techniques. Often, the guitarist will play a chord and melody simultaneously, giving an advanced feeling of depth to the song. Fingerpicking is a standard technique on the classical or nylon string guitar, but is considered more of a specialized technique on steel string guitars and even less usual on electric guitars.

again, I Can't thank you enough! so happy I came here!

It sounds like what you want to do is play some of the melody notes (what the singer is singing) by picking them out of the chord you are playing - or while staying close to the chord so you can play the melody over the chord and keep the rhythm going at the same time.

When that does not work, I try alternate chord voicings until I find one that will work. A good chord reference book with alternate ways to play each chord will help you find the most common variations of each chord. Or you can find on-line resources like this site Guitar Chords that will show you alternate voicings for any chord you can think of.

By choosing an alternate voicing, I can usually find one that allows me to pick out some melody notes by simply lifting a finger here or placing another finger down there - while still maintaining the basic chord shape.

When even that does not work, I often find that using a capo and a different chord set will give me chords that allow me to easily play the melody notes while keeping most of my fingers on the chord. I can keep the song in the same key but play it with up to five different chord sets (I don't like to capo past the eight fret) by knowing where to put the capo.

For example, let's say I am playing a song is in the key of A and the chords are A - D - and E but those chords don't contain all the melody notes I need or allow me to get to them easily without moving away from the chord shape. I may find that by putting a capo on the second fret and playing a G (instead of the A) a C (instead of the D) and a D (for the E chord) that the new chord formations will allow me to play all the melody notes I want while holding most of the fretted notes of the chord. With the capo on the 2nd fret - playing a G gives me an A - so I am still in the key of A - only now using completely different chord fingerings.

This chart will help you find all the different chord sets and relevant capo positions for any key. 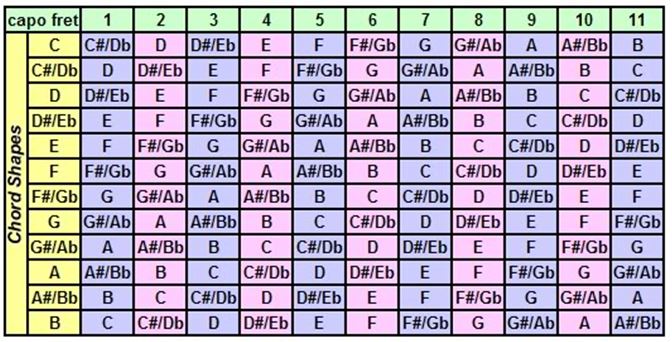 For most songs, between alternate voicings of the chords used in the song or changing the chord set with a capo (and trying alternate voicings of those chords) you will be able to find a chord variation or chord set that allows you to play fills consisting of the melody notes while continuing to strum the chord. There might be an occasional exception, but then one of the alternatives suggested will still get you to a chord shape and position that makes it easier to find the melody notes without straying far from the chord you are playing.

In summary, and over-simplifying:

A more academic discussion on the same subject, with a jazz angle, is included in the book "Forward Motion" by Hal Galper.

It somehow seems to me you're asking if you can play the same scale over all chords from a given song, which would be : mostly. Usually a song or a song part will be in a given key (so a single scale should fit), but it will slightly change one chord to add color. Off the top of my mind I'd say the change from C to C minor in Radiohead's Creep or the secondary dominant in, well, loads and loads of songs (the first two are the TL;DR of it).

As for the pentatonic, there some sort of halfway between an arpeggio (only chord tones) and the scale. Sometimes it's best to stick to one pentatonic for most of one song, sometimes it makes sense to adjust every chord change or so.

The thing is, the theory behind can be tedious and overwhelming, but if you want to understand every nook and cranny you'll have to digest it in some way. Functional harmony, modes, chord progressions, you need to know the basic of all of it. It's not that bad, but some ways of absorbing this are more engaging than others - I know I find the pure academical way of presenting harmony absolutely soul crushing.

Anyway, if you're using the melody and chord tones to choose what to play, you're already doing fine. In case it doesn't make sense but sounds fine, it means you're right.

Moreover, this is more inclined to work if you see your own role as providing a counterpoint vine of melody, or holding down a meta-melody comprised of both root melody and components of the chord progression within that scope. If there are chords with components outside the song scale, that implicitly declares the song as having a parallel scale(s) as well (or subscale). If you can get a feel for that overarching subscale or metascale, you can operate consistently within it, you can actually hold the song together more than originally composed. It can validly be perceived as either subscale or metascale, but the choice of which will determine the color of the song. If you have a skilled partner, you should zero in on a subscale consistently vining through the song, and them the other, combining to create the metascale as defined by the union of the original melody and chord progression.

A basic comprehensive reading on classical theory would greatly benefit your improv and understanding of how melody relates to harmony.

Specifically regarding your question, this link will greatly help you: Wikipedia nonharmonic tones. Check out Suspension.

The benefits are immense from a basic fundamental knowledge of classical theory. I can't stress it enough.