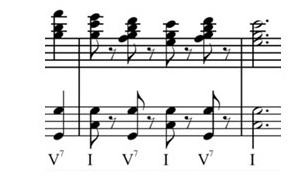 Take a look at this link here : https://www.historicaltuning.com/Harmonics.html It gives an example of particular keys on the keyboard, and discusses harmonics. One of the G keys shown happens to be the third harmonic relative to a 'fundamental' frequency note that happens to be one of the 'C' keys. And there are information sources out there (such as physics and applied science) that discuss adding particular harmonics together -- eg. if you add the 'fundamental' (aka first harmonic) and the third harmonic together. When they do it, some sort of 'constructive' (non-clashing) effect occurs when we look at the resulting 'summed' waveform (combined result). But when we focus on the third harmonic ----- this one, and the first harmonic ----- the transition from third to first harmonic (aka fundamental) appears very natural - without clashing ----- due to their particular constructive, non-clashing nature.

Also, when we're talking about a harmonic, it refers to a sinusoidal behaviour. And a sinusoid can be defined by a frequency, and an amplitude, and also a reference point in time. So if we compare a 'fundamental' sinusoid with a third-harmonic sinusoid, then we would be able to see that the peaks of both the fundamental and the third harmonic sinusoid are "symmetrical" (in a time plot) ----- symmetry around the point in time where the fundamental has a peak (highest point). Eg. see this link here : https://electrical-engineering-portal.com/harmonics-what-are-they-what-do-they-do

However - unlike music notes, the information in the above link does NOT have the third harmonic being at the same 'amplitude' as the fundamental. But that's ok, as that information is under a slightly different context. We're just borrowing their diagram only.

And the third harmonic just so-happens to have its highest point there too - at the same time. So this relates to the strongly additive nature of fundamental components and third harmonic components. They're sort of (or strongly) on the 'same page' ---- or a nice match-up. So hopefully these details can help go toward getting ideas about why 'dominant' notes transition nicely (resolve) to fundamental/root/tonic notes.

Although ----- when we strike a particular note on the piano, such as hit a 'G' key, then the sinusoidal waveform won't necessarily be (at first) lined up (in time) with the 'fundamental' waveform. But - maybe - as seen in some science experiments, some physics mechanism occurs, in which the waveforms become aligned. And maybe electronic tone generators may need to have this sort of alignment as well. Or --- maybe human ears aren't sensitive to timing differences when we transition from a third harmonic note to a fundamental note. I thought I'd just mention it - just in case!

Edit (addition) - a contributor in the comments section made an excellent point - in that - for example, when G resolves to C, the two notes are not sounded simultaneously. There is certainly an interesting link between third harmonic frequency and fundamental frequency.

Just to be extra clear ----- let's take the note C2 on the keyboard, which has a frequency of 65.406 Hz. The third harmonic frequency is three times that frequency, which is 196.218 Hz, which is close enough to 196 Hz, which is the G3 key. So that takes the G to C transition into account.

And one extra observation that could be important too is ------- note that the highest note in the dominant chord (for our example) is a 'D'. So - when we play the notes of the dominant chord one note at a time, we get G, then B, then D. And if we immediately follow on by playing all three notes of the root chord (all at once ----- C-E-G simultaneously) ....... then the overall result - to our ears, will actually sound like playing these four notes (individually) in sequence ---- G-B-D-C. The step-down from D to C sounds natural ---- a stepping down of the 'major 2nd' from D to C. And - the 'C' note (being the root/tonic note of the root chord) will have its side-kicks E and G (as part the root chord). And those two side-kick notes will just be secondary ------ as 'C' will have the biggest influence in the root chord. That is, even though the root chord is played (with C, E and G played simultaneously), it really sounds more like an overall 'C'. And we just feel that this sequence --- G-B-D-C ----- like a 'done deal' when we play it. Or, alternatively, if we play the dominant chord notes (simultaneously G-B-D), followed by playing the root chord (simultaneously), then --- to our ears, it just sounds overall like playing a 'D' followed by a 'C', which also sounds like a 'done deal'. This sort of natural terminating pattern certainly occurs when the two chords of interest happen to be the dominant chord and the root chord.

Also - there is also the situation about what happens in our mind (or brains) - in the way we process sound information. For example - somebody or some animal that hasn't been conditioned to recognising and accepting audible frequency sound sequences - such as a transition from a 'dominant' to root - probably wouldn't make much of this interesting pattern. Maybe getting into realm of 'psycho-acoustics'.

Yes, it's about the minor second ("half step") movement.

In the diatonic gamut that only happens in two places: Vb I and Ib IV. (b means first inversion.) There is a sort of equivalence in those two progressions in terms of root progression and voice leading. In a purely diatonic context the two can be distinguished by making V a dominant seventh chord, like V7b I. You cannot do the same diatonically moving to IV and the added seventh in V7b provides two minor-second motions resolving to I in TI DO and FA MI.

It's interesting to compare these progressions with some other progressions that also have the voice leading of one voice held and two moving by step:

While those chords are all chromatic it's important to note the chord roots are diatonic. So while they are chromatic, they are also quite "at home" in a key.

Technically Fr+6 V is root progression by descending P5 and it has two minor-second resolutions, with one of those moving to the chord root of V. That is quite strong.

ivc I is root progression by descending P4 a bit "less strong" than descending P5, and the non-movement to the root of I as a held note provides some theoretical explanation of why it's "less strong."

To some degree I'm simply saying an important, unique distinction for V7 I, in addition to the minor-second movements, is that it's a diatonic progression. But some other chromatic progressions share similar characteristics. It's good to be aware of those progressions. And they also reinforce the notion that minor-second motions do indeed create "strong" progressions.

Finally, I think it needs to be stated that the "strength" of the dominant leading to the tonic, the strength of the leading-note moving up to the tonic, is a matter of convention. It's perceived as strong, because that is how the major/minor system treats it. However, in modal style, in the Phrygian mode, this convention is literally turned upside down. In Phrygian the "leading note" is a minor-second above the tonic. Final cadences might look like vii I or viib I, a minor subtonic chord moving to a tonic with a tierce de Picardie (two voices moving by a minor second, but root progression by a major second). (In the Phrygian mode, the seventh degree --- the root of the chord vii --- is a major second below the tonic.) That progression totally reinforces the theory that minor-second movements make strong progressions, but allows for tonalities other than only major and minor keys.

5
Dominant seventh chord in the major scale contains diminished triad of the seventh?
8
Why do certain chords "lead" to another?
2
Do chord progressions usually move by fifths?

21
Harmony in Phrygian : What chords are tonic, subdominant, and dominant?
1
Why is it called dominant function and not subtonic function?
2
Why has the vi chord no tonic function, i.e. what gives a chord its function?
3
Is the dominant tone of a major scale halfway in frequency between the tonic and octave?
8
Why is the third triad dominant?
3
Why does VII have dominant function in natural minor
6
Diminished chord constructed over the tonic degree?
6
Why are subdominants unstable?