proper use of secondary dominant

I'm writing a song--the photo posted below is the last two measures of the verse and the first measure of the chorus (this is a reduction). I wanted to create some extra tension before playing the A minor chord, so I figured I would play an E minor chord (the fifth of A) and add some 7th scale degrees in there (D note) to make it the dominant seventh chord for A. Did I execute this properly? The E minor chord sounds quite muddy.

I am just wondering if there are any ways to improve this sequence. Please let me know!

After fiddling a bit, this is where I'm at: 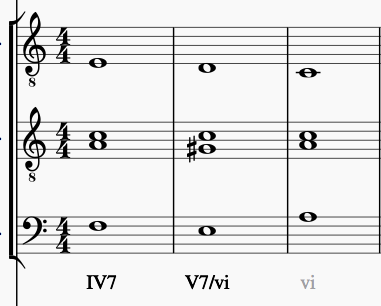 This sounds like an improvement to me. Thanks for the help!

As you have it now, it's just a simple fifth relationship. You're in the key of C, and you have iii7 moving to vi.

Therefore, your Em7 chord will become E7 (E G♯ B D), and that chromatic addition of G♯ will add in the color I think you're looking for. You can experiment whether you want the G♯ to begin right on the downbeat of that measure (what I would recommend) or on the second half.

In making this Em7 an E7, we can now better analyze it as V7/vi. In this way, we show precisely how this chord is functioning: as a secondary dominant of vi. This label is much more informative than just calling it something like III7.

(And technically speaking, we tend to resolve chordal sevenths down by step. This means that D, the chordal seventh above E, will want to resolve down to C in the next chord. You do this in the middle staff, but it looks like the D in your top staff resolves up.)

As for the chord sounding "muddy," it may because of how you've voiced it. Notice that you have two Bs, two Ds, and only one G(♯) and one E. Typically you'll want to double the root (E) before you double anything else. Even changing the D in the middle staff to an E might make a big difference.

Secondary dominants are used to get to another chord other than the tonic. It could be just about any chord - in C, there's a good chance it'll be Am, Dm, Em or G as the main contenders.

That secondary dominant needs to be dominant. Therefore, it needs that leading note to the new chord. In your case, going to the Am, it needs to have a leading note to A, which is G#. G doesn't quite hack it. So, with that G#, (which is found in the Am key if that's an issue) and the D making a tritone, it resolves nicely to the Am.

If the chord you were going to was Em, then the secondary dominant would need to be B7, with a couple of non-diatonic notes necessary. That would be B7. And if you were getting to G, you'd need the leading note of F#, with a C, producing the tritone again which would be crying out to resolve to a G chord.

There's nothing wrong with the original sequence (if it sounds good with the rest of the piece); it's not really a secondary dominant. Formally a secondary dominant is a major-minor chord built on the step above major or minor chord. It makes a local tonicization of the major or minor chord; if that chord isn't confirmed as representing a key (by playing a cadence there and "neutralizing" the tone or tones which differ from the home key), it's just a blip reinforcing the original tonality.

Well, going from a minor chord to its minor seventh is a very uncommon chord change. It's of course doable, but you may like other tension-building sounds better. It's difficult to add in a chord between the dominant and its resolution.

You may like changing the iii7 to III7 (E7), as usually the "dominant seventh" of a minor key refers to the dominant seventh chord, not the minor seventh. Additionally, if your song is in A minor, I'd suggest analyzing in A minor rather than C major. If it's in C, you're good. Alternatively, you could change the iii to a chord with subdominant function, say iv or VI, maybe even the minor ii-V (B half-diminished 7 to E7 in A minor). The main problem I see is the fact that only one note changes through the iii-iii7 movement, usually not ideal when the chords have the same root.

Unusual chord movements are also on the table, such as, depending on how the unreduced version of the song goes,

My suggestion is to change one or more of the chords in order to create more movement, as generally that E-D movement sounds pretty weak. Good luck with the song!

Not the answer you're looking for? Browse other questions tagged theory chord-theory harmony or ask your own question.

3
Music Theory, Circle of Fifth, Chords that fit, Exceptions and example song "Sultans of Swing"
2
Modulation via a major chord, then another major chord a half step down
1
I've found the chords to Chicago by Meg & Dia but can't figure out the theory
1
Can I use a B7 chord voicing in the key of Bm?
1
Modulation in Pinocchio's I've got no strings?
11
Can someone explain the theory behind the changes in Superstition by Stevie Wonder?
2
Does Tchaikovsky's Sleeping Beauty modulate to the relative minor?
0
What is the relationship between the 5th and minor 7th in dominant chords?
10
Adding an Extra 2/4 measure into the middle of a 4/4 chorus
6
How can I modulate the distance of a tritone using 3 secondary dominant chords?