What is this chord in Haydn's Symphony No. 94?

Can anyone tell me what chord is in bar 115 of the attached image, and how it relates to the key of F minor (just edited, accidentally said F# minor at first) (which is also the subsequent chord)?

It sounds like a diminished chord and the main notes appear to be Db G Bb E. 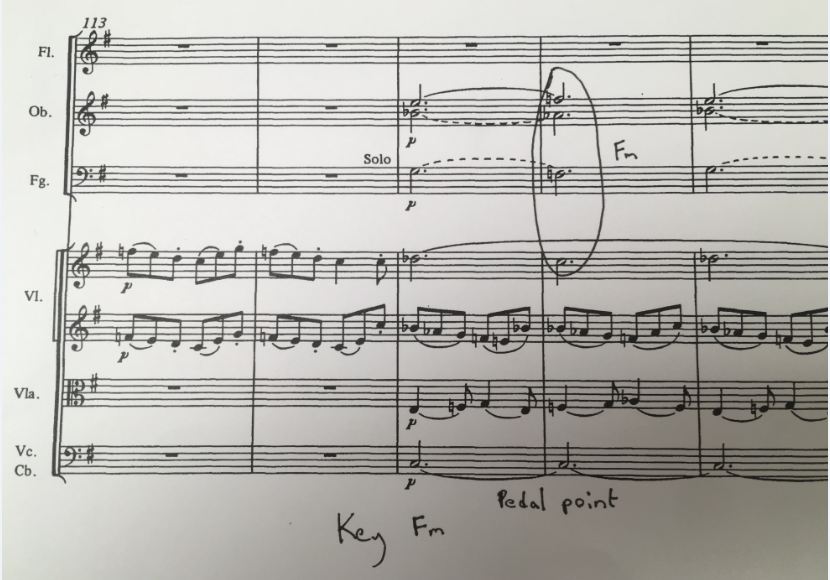 Are you sure you mean F♯ minor, or did you just mean F minor?

Although the key signature has one sharp, the music at this point is clearly setting up a big dominant of F. Above the pedal point C, the E♭ G B♭ D♭ that you mention is an E fully diminished seventh chord, which is a viio7 chord in the key of F minor.

Some would choose to include the bass C in the chord, and call this a V7♭9 chord. But in my experience with Haydn, he rarely uses true ninth chords. Instead, he's alternating between this viio7 and i, always above the C pedal, to prolong dominant and build tension before it finally resolves to a root-position tonic.

As well as the pitches Db G Bb E which you mention, there is also the C in the bass (I see you also notated that as "pedal point"). I agree with Richard that the key is temporarily f minor, and I'd argue that the chord is indeed V7♭9. Arguments in favour of this analysis: the chord precedes i, it has all the pitches of V, and it doesn't have any which mitigate against the impression that it is chord V. What's more, the C is in the bass, strengthening the impression that C is the chord's root. Analysing a chord as some classified chord over a separate pitch as pedal is what you have to resort to if the pedal note doesn't fit harmonically in with the chord; however, here, it does, so it sounds like part of the chord rather than a discordant pedal, so the above classification accords with what the chord sounds like.

Moreover, I'd say that this classification is not just credible but the only credible one: Richard's alternative, viio7, has dominant function; add to this the actual dominant in the bass, and the result is the aforementioned V7♭9.

As for Richard's argument that Haydn rarely uses true ninth chords, rare they might be, but why not classify a chord as such when the evidence for this classification is so strong?

Not the answer you're looking for? Browse other questions tagged theory chords notation harmony or ask your own question.

5
Sharp / Flat: Collectively known as property by what name?
5
Harmonic analysis of “Walk this Way” by Aerosmith
5
Not sure why this works?
1
How do you decide a chord?
4
What key is a piece in if an augmented chord is used as a dominant?
3
Is the half-diminished seventh chord more commonly found as iiø7 in minor than viiø7 in major in common practice harmony?
6
Implied notes in a chord