Clarification on Schoenberg's "pivot tones" in minor from Theory of Harmony

At first it confused me for two reasons:

My initial understanding was that the directions on pivot tones must be followed absolutely in all voices, and this was why VII never appeared (going to VI is prohibited at this point because of the lack of common tones.) But his treatment of VI contradicted that, which if my understanding was correct would have the same problem as VII and therefore be unusable until inversions were "unlocked."

I also realized sometimes he delays the descent or ascent after the pivot tone by sustaining the note, which I didn't realize was allowed at first. But that didn't fix the problem of the bass leaping out of VI.

So then I made a new assumption: maybe it's okay for the bass to leap if the same voice is doubled in the rest of the chord, and that voice follows the pivot rules? This theory seemed to hold up for most of the chapter. I couldn't find any cases where he broke this version of the rule without pointing out that he was breaking it.

(As a side note, I also don't understand why he marks the II-VII progression above as unusable. It seems like he can just sustain all the notes outside of the bass.)

It also occurs in the phrase examples for sevenths, in multiple places. For example, on the second line the G in III goes to A: 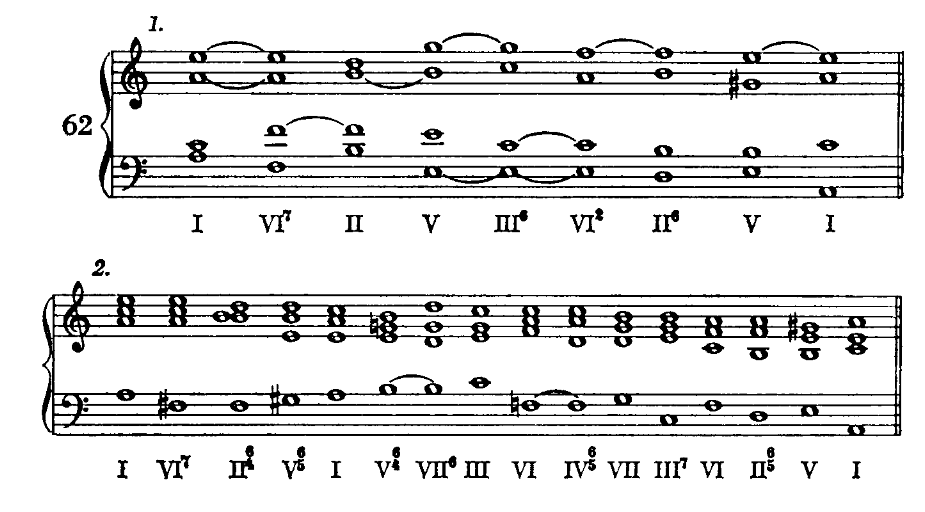 And the F in VI6 from the second line here leaps to C: 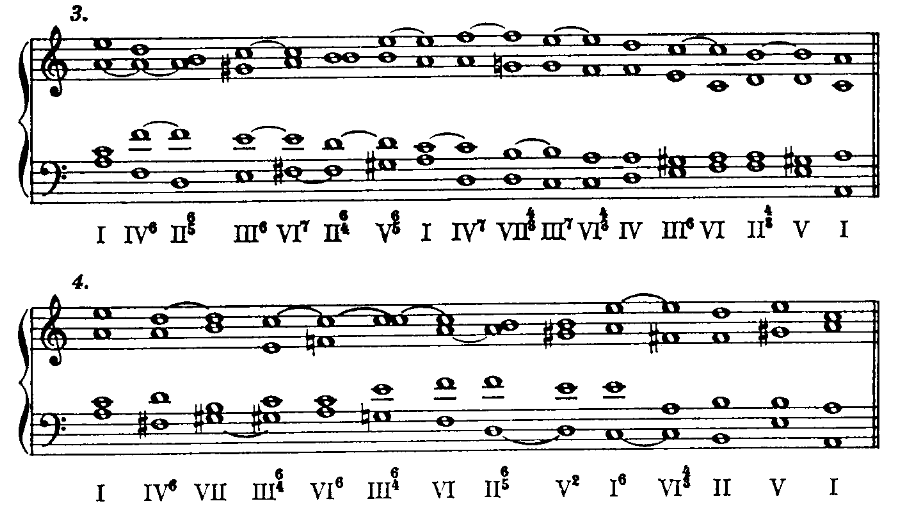 Unlike the previous phrase examples where me points out such choices as mistakes, he doesn't comment on these. I'm not sure how much this matters, assuming the restrictions will be lifted, but if I am going to go through this book I would like to do it properly without going halfway.

Am I still missing something in the meaning of these four points? Is it a coincidence that he didn't use the unraised VII chord this whole chapter until the section on seventh chords?

From what I remember about the book, it is not directly required that the seventh and sixth non-raised degrees go to their corresponding 'resolution tones'. However, they need to do just that to be neutralized, and neutralizing is a necessary condition for "unlocking" the raised degrees. In the case of the raised degrees, if I remember correctly, as they are considered by Schoenberg as 'alterations' they must be followed by the degree in which they are neutralized, save for held notes.

In other words, the instructions (in A minor), 'G must go to F' and 'F must go to E', mean that they must eventually follow that 'resolution' in order to permit the introduction of the raised degrees. Since the raised seventh degree is necessary to form a dominant and, therefore, cadence ,in minor tonality, that needs to happen eventually, in the context of an exercise. So neutralizing the non-raised degrees, although not a direct requirement, ends up being mandatory due to other rules.

One must note, though, that neutralization is not a sufficient condition for 'unlocking' the correspondent degree, as memory chromaticism must be avoided by introducing the raised (non-raised) degree in a voice other than the one in which the non-raised (raised) degree was neutralized.

The II-VII7 connection in the example is impossible, I think, because the tenor can't go to D (parallel fifths) or B (doubling of the third), which leaves only doubling the G as an option. Although the neutralization does not have to be immediate, I still believe Schoenberg forbids doubling of the sixth and seventh non-raised degrees. I imagine the reason for that is the voice-leading complications that neutralizing first the G in one voice and only then in the other would cause.

5
What did Schoenberg mean with this?

31
Understanding minor key harmony
3
In 4-part harmony exercise, how to harmonize soprano 1 to 2 with IV6 - V?
5
Is this a hidden consecutive fifth?
5
Why does O Little Town of Bethlehem have two melodies?
3
Diminished seventh cadence, is this an IAC or a PAC?
5
Is this cross relationship of the seventh degree in minor key harmony OK for 18th century style?
4
Diminished seventh spelling but functioning as an Augmented Sixth?
2
Definition of a step in the (melodic) minor scale? (According to the definition in Kostka - Tonal Harmony and examples therein)
14
Is this chord from Bach's C major Prelude G+ or Cm?
3
Beethoven Piano Sonata no. 1 in F minor: What are the first 2 chords of the transition?