I'm having some difficulty deciding which notes with accidentals are considered as chromatic, and was wondering if someone could confirm/deny my assumptions about notes in the attached notation of Mozart's String Quartet in D Major, K155.

Bar 24: Chord is A. G# is not part of A chord but is leading tone in A major scale, so not chromatic? 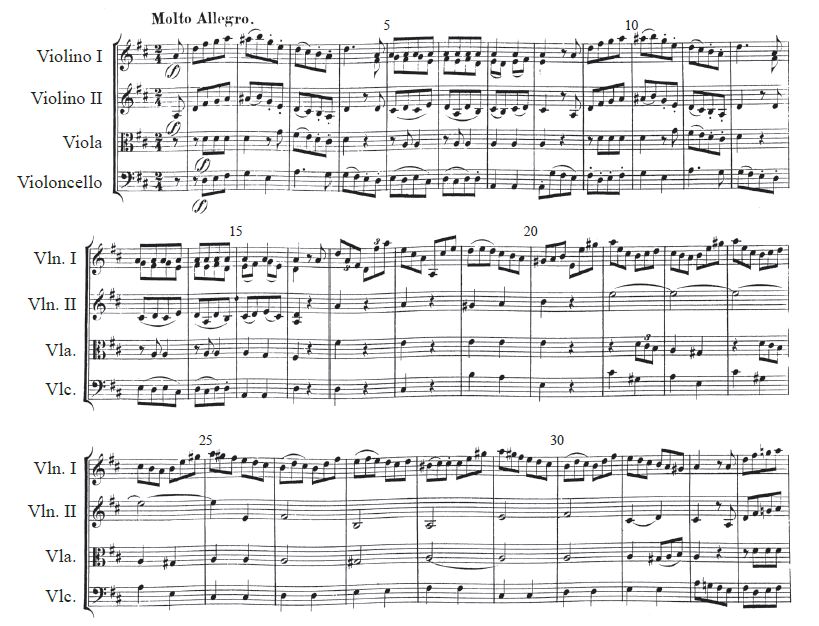 we are still in A major and its related key f# -minor (and not F!)

B# isn't the tritone of F anyway and here B# is a chromatic appraoch to the 5th of f#m (or the 3rd of A major if you want). The G# is still lead tone to A.

The question could be: Is the lead tone of the secondary 5th a chromatic?

Regarding the tonic key D major someone will say "yes" - but as the entire phrase from bar 20 - 30 is in the dominant key of A I would say: No, in my opinion (as this passage is tonisiced to A major).

Not all of them. When the section B (bars 17-32) are considered as modulated to A major - then G# will be the diatonic lead tone of this key.

Decide what key you're in. Notes which are not diatonic in that key are, by definition, chromatic.

If you feel we're in A major/F# minor (often pointless to try to distinguish the two) at bar 28, the B# is chromatic, the G# isn't.

I would say tones that are not diatonic to the "local" key are chromatic.

By "local" I mean the various keys to which the music may modulate. So if the music modulates from D major or A major label anything as chromatic if it isn't diatonic to A major.

Not the answer you're looking for? Browse other questions tagged scales harmony accidentals chromatic diatonic or ask your own question.

4
A piece has a given key. When it modulates, are the consequent accidentals *chromatic* or are they *diatonic* temporarily?

3
Tuning of Accidentals & Scales
11
Can a song be in the chromatic scale?
5
How a chord is analyzed as a “chromatic mediant of the V”?
0
Am I right in that it is a diminished triad without the third?
3
How to overcome emotional tension with this Beethoven rondo
4
Chromatic 7th chords going upwards in Beethoven
3
Chromatic Mediant modulation: Can I use an omnibus progression for this?
2
Can you solve these figured bass queries?
0
(REVISED): Roman Numeral Analysis of Fuchs- 'Mother Tells a Story'
6
How to compose better chromatic harmony