Is this a Neapolitan 6?

We are in G minor, in bar ''1'' we have a long A flat, but we instantly seem to return to G minor afterwards, so this doesn't seem like a modulation to EflatM or Cm. Under the A flat there is a C in the bass, which might suggest N6, however the chord does not move to chord V but to chord i. Can N6 chords work this way?

Bonus question: At the beginning of bar ''3'' we seem to have V7- can the circled E flat be interpreted as a flat 9? There is an E natural on the very next beat in the bass, does this affect the note above?

thanks for your time! 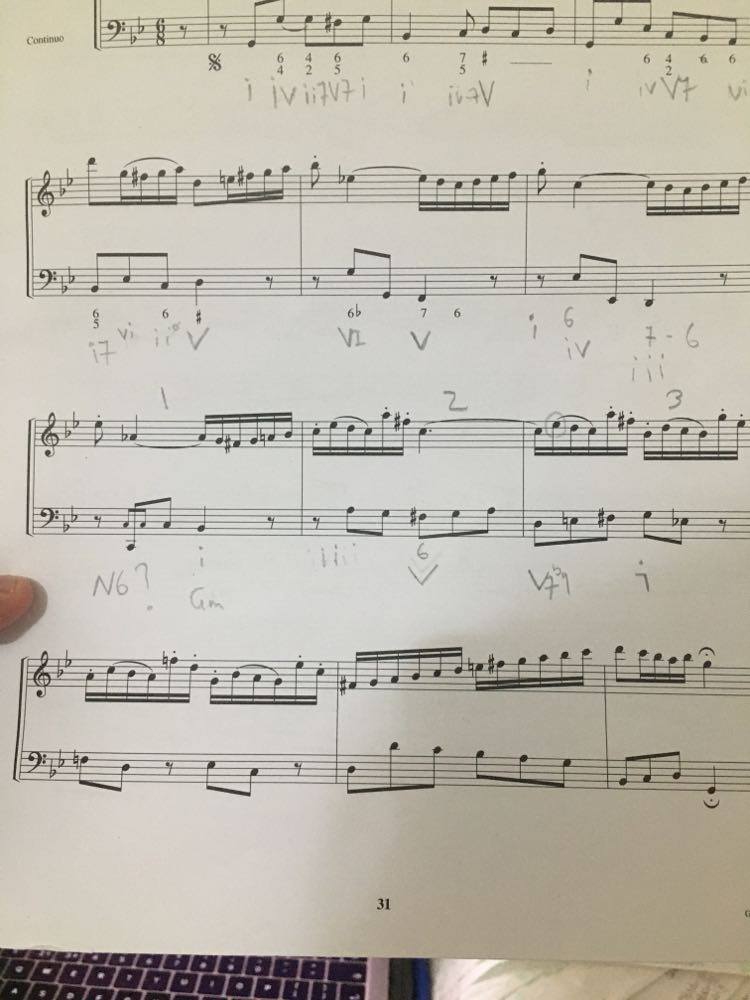 The chord needs to be interpreted in context. Take a look a couple bars before. After the strong arrival on V in the first bar of the first fully visible system in the photo, the piece launches into a descending sequence.

The sequence (as noted by the figures 6 and 7-6 in the first bar) was clearly conceptualized as simple descending parallel "first inversion" chords. In Roman numerals, I suppose one could write: VI6, v6, iv6, III6, ♭II6, i6, but that's relatively meaningless as these chords aren't functional. They're just parallel sixth chords, which are frequently used in baroque music to generate simple sequence progressions.

It's a little more complex than that, as there's a bit of ambiguity as to the identity of the "chord" in the second half of each bar. According to the bass figures and my sequential interpretation, most of the "chord tones" occur on the offbeats. That's not unheard of, but it is a bit unusual. So, there's a bit of wavering between whether the 6th or 5th above the bass may be the "real chord note" in how listeners might perceive it, but that's okay. (It's especially okay considering the looks of this piece, since it was likely written before Roman numerals were used for analysis and before triadic harmony was viewed the way we do today.)

As to whether the chord in question is a "Neapolitan sixth," well sure, by the pitches in it, it is. But it doesn't resolve in the standard fashion because it's in the middle of the sequence. Clearly the A♭ occurs here because it's a standard pitch inflection in minor to have a lowered second scale degree, especially when paired with the other notes here to create a "Neapolitan sixth."

Regardless, the bar in question doesn't have a consonant fifth above the bass in the second half of the bar, so the latter chord is more clearly i6. Again, though, the way a piece like this was composed wouldn't focus on that moment (or any "chord"), but rather see the descending sequence continue to force the bass downward in the next bar, creating a continuous G-F-E♭-D-C-B♭-A-G-F♯ bass line that finally arrives on the tritone (F♯-C) on the second beat in the next bar, a tritone that resolves ultimately on the G-B♭ on the second beat of the last bar in that system. (All of that is immediately followed by yet another sequence, by the way.)

So, if you want to think more along the lines of how baroque composers would have conceived this, that's a bit of a snapshot, rather than worrying about Roman numerals and any "function." The first truly active functional sonority in that phrase likely arrives with the tritone I mentioned. (This is roughly in line with Michael Curtis's broader harmonic interpretation too, as the i6 never really "comes into focus," instead passing along from the N6 eventually to the tritone in the next bar and the implied V.)

As for the circled E♭... well, note that the melodic pattern is exactly the same as began the previous bar. In the first iteration, you seem to have interpreted the sonority as implying iio, which is fine. But the "bigger picture" here is that the composer is reiterating the same melodic motive with increased harmonic tension. The first iteration might be thought of as a iio or maybe an incomplete V♭9, particularly with the F♯ in the melody, but the second iteration has a more clear "dominant" disposition with the D in the bass, implying a V♭9. Again, this is all to create tension and then resolve to i, rather than returning to the tritone of the previous bar.

Ab7 to Gm works as the tritone in Ab7 is the same as in D7 (Gb and F# enharmonically). It's not as common in classical style as in pop and jazz but it does occur (I think it's a tritone substitution.) Classically, one often goes through the I64 and V7 after the Neapolitan but both resolutions work fine.

It is a neopolitan sixth! A flattened ii, 1st inversion.
Points about recognising them:

I think you can look at this two ways:

The other way to look at it is from a higher harmonic level. If you regard all of measure 2 and the first have of measure 3 as a long arpeggiation of a dominant chord, and with some octave displacement the bass of C, Bb, A treating the i6 as a passing harmony, then you do have the N6 as a pre-dominant to V9.

Not the answer you're looking for? Browse other questions tagged harmony exam-grades figured-bass or ask your own question.

2
Can you solve these figured bass queries?
2
Which modulation is correct? (amongst other things!)
0
Is this some sort of suspension? If so, how do I write it in?
0
Who knows whats happening in this score?
0
Have I successfully/legitimately modulated?
2
Is this a deceptive cadence?
2
Is this an example of III7 augmented chord?
0
Roman numeral analysis of exam practice exercise: "Polish Song" by Hiller
1
Is this a harmonic sequence?
0
(REVISED): Roman Numeral Analysis of Fuchs- 'Mother Tells a Story'